A glimpse into the life of a Syrian refugee

Hundreds of refugees from Syria making the long walk to safety in Jordan, one long jagged line stretching out into the open desert.

They carried teapots and tiny gas canisters, shopping bags filled with clothes and overstuffed bundles of blankets balanced on their heads. Many held jerry cans, once full with water, now dangling empty. 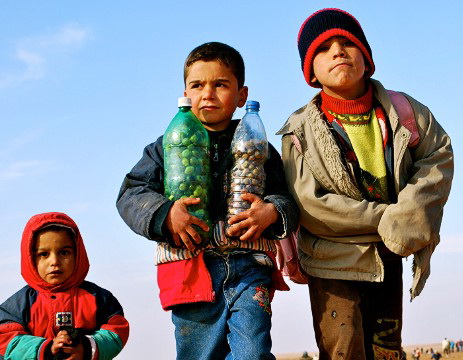 The refugees came from the outskirts of Damascus, walking for days in order to escape the ugly civil war that has engulfed their country for the past three years.

Their destination, like so many thousands before them, is the Zaatari refugee camp in Jordan. The numbers are staggering: Syrian refugees are now estimated to make up 10% of Jordan’s population.

The population demographics in Zaatari are skewed towards women and children but also a surprising number of elderly residents. Consider these statistics: More than half (54%) of the camp’s residents are under the age of 17. 42% of families in the camp are led by a female head of household. 3% are more than 60-years old.

Nothing can take away from the pain and loss of being a refugee. But everyone we met had a remarkable story of resilience and determination. Zaatari is a remarkable place because its residents are building a strong community out of what little they have. They build homes, invest in businesses, plant vegetable gardens and paint works of art. But every single Syrian refugee I spoke to said the same thing: if the war stopped today, I would be home tomorrow.

As nearly 600 days under siege sap the life and dignity out of the Old District in the Syrian city of Homs — leaving malnourished men with legs like noodles and soot-stained children to dig through homes turned into rubble for bits of firewood — diplomats in picturesque Geneva bicker over aid.

The Geneva peace talks seemed to matter little to residents living on perpetually empty bellies who demanded all parties put aside their differences to break the almost two-year siege of Homs rather than agree to a temporary solution from a reluctant regime.

The United States blamed the Syrian government for the dire situation, accusing it of waging a “kneel or starve campaign.” As the bitter winter cold retains its hold on the restive city, activists and residents say starvation and the lack of basic medical care claim lives regularly as Syrian troops and some opposition forces prevent the delivery of aid, according to a report from Human Rights Watch last month.

Tree leaves, grass, olives and stale grain are all that’s on the menu at many homes in the old districts of Homs, where many residents say they struggle to get just one meal a day on the table while loved ones with preventable diseases languish in a makeshift medical clinic with “medieval health care.”

“The world must help us; they can’t watch us drown in a sea of suffering, pain and death and do nothing after more than one and a half years of being under siege” the Rev. Frans, a Dutch Jesuit and longtime Syrian resident, said in broken Arabic on social media.

South Sudan seceded from Sudan in 2011 after decades of war. Now, a month of conflict has now displaced about 413,000 people in South Sudan after a major surge in the number of people fleeing violence.

The violence has also forced about 78,000 to flee to neighboring countries, the United Nations said, on top of the hundreds of thousands displaced within South Sudan’s borders. Many are women and children. More than 42,000 people are now in Uganda’s West Nile region, according to the United Nations’ refugee agency, the UNHCR, while about 18,600 have sought refuge in Ethiopia. Nearly 6,800 people have fled to Kenya.And an estimated 10,000 have fled into Sudan’s volatile West Kordofan and South Kordofan states.

Hundreds of people have been wounded and thousands displaced, Medecins Sans Frontieres (MSF) said, also known as Doctors Without Borders. MSF said the medical needs of the displaced are placing existing health facilities under increasing pressure, with some clinics and hospitals already overwhelmed. The group added it was reinforcing emergency teams to deal with the rising health and humanitarian needs.

“While we continue to treat more wounded patients in our hospitals every day, we are also concerned about the living conditions of the hundreds of thousands of displaced people across the country, most of whom fled their homes with nothing and have little food, water, or access to health care,” Raphael Gorgeu, MSF head of mission in South Sudan, said in a statement. “The fighting in Malakal over the past few days has limited our ability to reach displaced people where they are gathering, preventing people from receiving the medical and humanitarian assistance they desperately need.”

85 of World’s Richest have same wealth as 3.5 Billion Poorest

The world’s 85 wealthiest people have as much money as the 3.5 billion poorest people on the planet – half the Earth’s population. That’s according to Oxfam’s latest report on the risks of the widening gap between the super-rich and the poor.

The report, titled “Working for the Few,” was released Monday, and was compiled by Oxfam – an international organization looking for solutions against poverty and injustice.

Also, according to the Oxfam data, the richest 1 percent of people across the globe have $110 trillion, or 65 times the total wealth of the bottom half of the planet’s population – which effectively “presents significant threat to inclusive political and economic systems.”

“It is staggering that, in the 21st century, half of the world’s population — that’s three and a half billion people — own no more than a tiny elite whose numbers could all fit comfortably on a double-decker bus,” Oxfam chief executive Winnie Byanyima told a news conference.

And the number of the rich is steadily growing: for example, in India the number of billionaires skyrocketed from six to 61 in the past 10 years, and their combined net worth is currently $250 billion.

The report comes ahead of the World Economic Forum in Davos which begins later this week, and urges the world leaders to discuss how to tackle this pressing issue.

P.S. – Since the late 1970s, tax rates for the richest have fallen in 29 out of 30 countries for which data are available, according to Oxfam.

A man lies dead; his severely emaciated body makes the rib cage protruding from his midsection look violent and sharp. A child sits in the dirt, the closed storefront behind him spray-painted with the words “I swear to God I am hungry.” The lifeless body of a baby lies discolored and wrapped in a white sheet.

These are a few of the pictures activists have posted on social media pages from the Yarmouk Palestinian refugee camp, just 6 miles from central Damascus. The camp has been cut off from aid since November 2013 and engulfed in fighting between the government and rebel forces since December 2012.

At least 44 people have died from a lack of food and medical supplies at the camp — 28 from starvation, said the Palestine Association for Human Rights in Syria, which has gathered and posted the names of the dead.

People are now surviving on water boiled with herbs, or families sharing a cup of rice with their neighbors. “We are dying, slowly,” resident Abu Mohammed said. “Just today, three people tried to go to an empty field to eat grass from the ground, and they were shot by snipers,” he said, his voice rising in frustration. “If you can imagine — people are dying just to eat grass.”

The United Nations Relief and Works Agency for Palestine Refugees in the Near East, or UNRWA, has tried to give food and other aid to camp residents “amid reports of widespread malnutrition in Yarmouk, amid reports of women dying during childbirth because of shortages of medical care, amid reports of children eating animal feed to survive,” said Chris Gunness, a spokesman for the agency.

Their attempts have been unsuccessful. On Monday, aid trucks had to retreat after the Syrian government told the convoy to enter from the camp’s southern entrance, where heavy gunfire prevented it from proceeding.

Yarmouk has seen widespread cases of “malnutrition and the absence of medical care, including for those who have severe conflict-related injuries, and including for women in childbirth, with fatal consequences for some women. Residents including infants and children are subsisting for long periods on diets of stale vegetables, herbs, powdered tomato paste, animal feed and cooking spices dissolved in water,” Gunness said.

“The scale of the crisis in Syria, with millions of civilians affected, is staggering and the humanitarian response insufficient,” Peter Maurer, president of the International Committee of the Red Cross, said Monday, at the end of a three-day visit to the country.

Posted on January 2, 2014 by Grant Montgomery

Refugees fleeing the conflict, most to Syria’s overwhelmed neighbors Jordan and Lebanon, top a whopping 2 million. Some U.N. officials expect that number to climb as high as 4 million in 2014.

More than 1.1 million of these refugees are younger than 18. Indeed, Syria’s youngest citizens are paying dearly for a war they did not create, one that is laying waste to their present and their future.

Three out of four Syrian children “have lost a close friend or family member in their country’s ongoing conflict” and “many have witnessed violence,” notes the International Rescue Committee. Charities such as IRC and Mercy Corps working with Syria’s children tell of young people isolated, lonely and struggling with the impossible task of coming to terms with all that they have seen and lost.

“If we do not act quickly, a generation of innocents will become lasting casualties of an appalling war,” U.N. High Commissioner for Refugees António Guterres said in November when releasing a report on the grim future facing Syria’s children.

“A grave consequence of the conflict is that a generation is growing up without a formal education,” the report said. “More than half of all school-aged Syrian children in Jordan and Lebanon are not in school. In Lebanon, it is estimated that some 200,000 school-aged Syrian refugee children could remain out of school at the end of the year.” They join 25 million kids of primary-school-age around the world out of school because of war.

Low educational attainment is among the strongest predictors of violence. Anyone hoping for a safer, more secure world had better start with educating children.

And yet until now, the international community’s reaction to the escalating death count and the rising number of hungry, homeless and displaced children has fallen somewhere between a shrug and a sigh.

This leaves children to pay the price. And so will the rest of us, eventually, if nothing is done to help a lost generation find a way to a more secure future.