UNICEF warned of what it described as grim trend lines for the world’s poorest children over the next 15 years, saying in a new report that many millions face preventable deaths, diseases, stunted growth and illiteracy. The forecasts in the report suggested that despite reductions of poverty and other deprivations in underdeveloped countries since 2000, what’s obscured is a worsening trend among the poorest segments of their populations.

The report was described by UNICEF officials as its “final report card” on whether children had been helped by the so-called Millennium Development Goals, a group of benchmarks established by the United Nations in 2000 for measuring progress in reducing poverty, hunger, child mortality, gender inequality, illiteracy and environmental degradation by the end of 2015.

While the Millennium Development Goals contributed to “tremendous progress for children,” the report said, “In the rush to make that progress, many focused on the easiest-to-reach children and communities, not those in greatest need.” Anthony Lake, the UNICEF executive director, added, “In doing so, national progress may actually have been slowed.”

The report showed, for example, that accounting for population growth, 68 million children under the age of 5 will die of mostly preventable causes by 2030 if current trends in child mortality continue, and 119 million children under 5 will suffer stunted development. It further showed that under current trends, a half billion people–more than the population of the United States–will be practicing open defecation in 2030, posing serious health risks.

Training socially-and-economically-disadvantaged women to start their own businesses

Isolde and Carla are two women who met at FEDES Vocational Training School outside Santiago. After they graduated, they started a successful business creating service clothing and school uniforms.

Giving women the ability of supporting themselves and their families is the reason FEDES exists. The FEDES tailoring and sewing courses are geared to train socially-and-economically-disadvantaged women, allowing them to learn a trade. Basic business concepts are also taught, aiding the women in creating a business plan to start their own micro-enterprise.

Since the women are from extremely poor social strata, they also receive subsidies for transport, and seed capital at the end of the course to help them buy a sewing machine and get their businesses started.

Read more about FEDES in Chile

The derailing of the U.S. Agency for International Development

USAID’s capacity is on the cusp of crisis: Its staff is divided between veterans who are aging out and greenhorns, with too few in the middle. From the standpoint of national capacity, America has a development donut. And it’s a problem that so far has gone all but unnoticed by policymakers or the public.

Since 2009, USAID has witnessed about a 16 percent real drop in funding while its partner across the Potomac, the Pentagon, fought a successful campaign to limit decreases.

Over the last two decades, about one-third of USAID’s professional staff, according to the U.S Global Leadership Coalition, has gone away, leaving it more or less a contracting office for NGOs, who are fortunately doing much better aid work than before. But there’s only so much even they can do, given their likewise limited economies of scale — which is one reason a leading global power has an international development ministry to begin with.

At a briefing delivered at the National Defense University in April, USAID’s human capital and talent management staff reported that its agency has about 10,000 personnel total worldwide. Just fewer than 4,000 of these, however, are Foreign Service officers or civil servants — the professional core of the agency. The remainder consists of non-American subject matter experts making up approximately 80 percent of overseas staffing, in addition to contractors.

What really limits America’s capacity, however, to foster its long-term international standing and national security is a cavity of human capacity right in the middle of the organization. Over 50 percent of the agency’s professional workforce — its institutional memory — is now past retirement age. Over 70 percent of the remainder has less than five years of experience. That means a serious shortage of seasoned staff in a middle management mode — and a dearth of future, seasoned senior leaders.

USAID has made significant strides in effectiveness, and doing a better job of demonstrating return on investment, as its annual performance reports have shown since 2007. There are still improvements to be made, but despite those made so far, Uncle Sam’s development arm is still atrophying. Not that anyone seems to care.

North Koreans are facing a “looming humanitarian disaster” according to the United Nations human rights chief Zeid Ra’ad Al Hussein, who told CNN, “We call for the international community to support the DPRK and help the DPRK in a respect of what is going to be a very difficult famine. … You may well see starvation on a massive scale unless there’s a massive relief effort in the weeks and months to come.”

The Asia deputy regional director for the U.N. World Food Programme, John Aylieff says. “It doesn’t take long for malnutrition to spike … So a short and fairly serious shock to the food system of the country can create quite serious implications for the population.”

State media, which usually paint only a rosy picture of life for North Korea’s citizens, have been publishing reports about what they call the worst drought in 100 years.

“Their decision to officially report the drought in their internal media is remarkable,” says Andrei Lankov, a professor at South Korea’s Kookmin University. “It’s a signal to both domestic and foreign audience that probably something will go bad later this year. So they will probably apply for foreign aid.”

Espoir Congo = Hope in the Congo!

A few years ago, Bernadette lost her husband, leaving her alone to care for her 5 children. The two youngest, Sincere and Fumusantu, were able to be enrolled in the Espoir Congo school, free of charge, including their uniforms and school supplies.

Additionally, Bernadette received weekly food packages as well as ongoing assistance from the directors of the school.

Needless to say, she was very thankful for the generosity and care her family received and for the opportunity for her children to study. She explains in this video that if it weren’t for Espoir Congo, her children would have nowhere to go, meaning would most likely end up begging on the street like so many others.

And to top things off, her daughter Sincere, a bright girl, ended up as the school laureate!

Global humanitarian assistance rose to record levels in 2014, reflecting the scale and scope of prolonged crises such as the conflicts in Iraq and Syria as well as increased contributions from Middle Eastern donors, according to a study by the non-profit organization Development Initiatives.

A report by the body’s Global Humanitarian Assistance (GHA) program showed that humanitarian assistance rose to $24.5bn last year, an increase of 19% on 2013.

Needs continued to outstrip contributions, however.

In its coordinated appeals, the UN fell $7.5bn short of the record $19.5bn it requested to help 87.5 million people. This meant 38% of requirements were not met, even though the world’s leading donors all gave more.

British Defense Secretary Michael Fallon suggested that his government could switch millions of pounds of aid spending into the defense budget to help meet its 2 per cent NATO commitment.

Speaking to the Sunday Express, ex-defense chief Lord Robertson said: “Including the foreign aid budget in defense spending is just sleight of hand. It’s double entry bookkeeping. … This was never the traditional way of calculating our NATO contribution.

“My view is that they should leave financial engineering to the bankers. In defense terns what matters is protection of the allies and they’ll not be taken in by a cheap three-card trick.”

He added: “Foreign Aid is now pegged to GDP and it is going to leap up as the economy grows.

Comparison of the relative magnitude of Syria’s humanitarian crisis 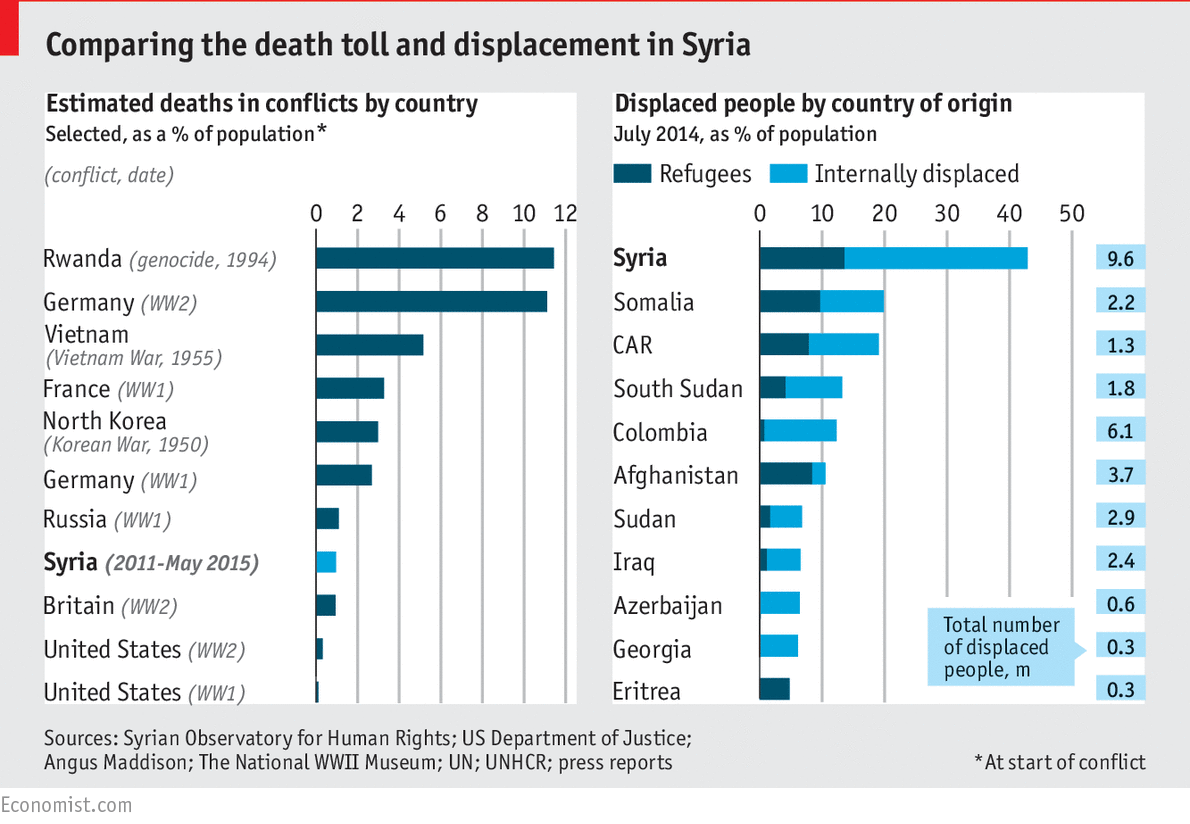 The magnitude of Syria’s humanitarian crisis

The war in Syria, now in its fifth year, shows no signs of letting up. Well over 200,000 people are thought to have died—though counting the dead is so difficult that at one point the UN simply gave up. Perhaps a million more have been injured.

Almost 12 million Syrians have been forced from their homes, with around 4million fleeing abroad. Syria is one of the top countries of origin for Europe’s boat people. It is telling that around 250,000 of the displaced have sought sanctuary in war-torn Iraq.

Inside Syria the fighting has caused one of the worst humanitarian crises of the 21st century. The economy is a wreck: four out of five Syrians live in poverty and unemployment is over 50%. The World Health Organisation says 57% of Syria’s public hospitals have been damaged, with 37% knocked out of service. Most of the country’s doctors have fled. The life-expectancy of Syrians, on average, is now around 55, 20 years shorter than it was before the war.

Ban Ki-moon, the UN secretary-general, says the country has lost the equivalent of four decades of human development. Over 4,000 schools have been damaged or repurposed. Power output is down by 56%, according to the electricity ministry.

Britain-based Syrian Observatory for Human Rights, which monitors the conflict through a network of informants on the ground, reckons ISIL now controls more than half of Syrian territory. The crisis will almost certainly grow worse.