Israel to expand settlements in West Bank with Trump blessing

In a statement released by the office of Defense Minister Avigdor Lieberman, the government said it approved the settlement expansion “in response to housing needs” in the Beit El settlement near Ramallah and other areas.

The Palestinians responded to the news by accusing Israel of attempting to sink peace deals and defying international opposition to the settlement expansion.

The election of Donald Trump, who has promised to be far more supportive of Israel than his predecessor, has emboldened Israel’s settlement movement. His campaign platform made no mention of a Palestinian state, a cornerstone of two decades of international diplomacy in the region, and he has signaled that he will be far more tolerant of Israeli settlement construction.

The White House said on Monday that Trump will host Netanyahu on February 15.

About 300,000 permanent immigrants come into Canada every year. That’s equivalent to about one percent of its population, one of the highest ratios in the world.

Canadians see immigration as critical to their economic success. The nation has invited in so many immigrants that today, one-fifth of the population is foreign-born. And Canadians don’t seem to wrestle with anti-immigrant nativism that has erupted in the U.S. and Europe.

These days, Canadians are taken aback when they look south. They see the climate of fear and anger that has broken out in America toward Spanish-speaking and Muslim immigrants.

“Canada has looked at the United States in many ways as an example of a welcoming society,” says Laura Dawson, director of the Canada Institute at the Woodrow Wilson Center in Washington, D.C. “And it’s disheartening for many Canadians to see the United States be so fearful, to be so xenophobic and not to be more welcoming to other folks in the world.”

Some Canadians wonder if that most American motto – E pluribus unum–”Out of many, one” – has moved north.

Chaos and dismay for refugees and immigrants

Reports abound of refugees being barred from boarding U.S.-bound flights, and immigrants being detained at U.S. airports.

Earlier in the day, several Iraqi refugees in Cairo, who had been cleared for resettlement in the U.S., were blocked from boarding their flight to New York City. And in Iraq, NPR’s Jane Arraf reported that “members of Yazidi minority, one of the biggest victims of ISIS, were prevented from boarding despite having visas.”

Green card holders — legal permanent residents of the U.S. — are also included in the ban, according to a senior Trump administration official. The official says they will need a case-by-case waiver in order to return to the U.S. if they are currently outside the country.

Colleges and universities around the U.S. have been advising students from the seven listed countries — including lawful permanent residents — not to leave the U.S. until there is further clarity on the new rules.

Protests are rising up at JFK and Los Angeles airports. Thousands of leading academics have signed a petition denouncing Trump’s actions. And top technology companies whose staff have been affected, are criticizing the move by President Trump.

Syrian Christian family, visas in hand, turned back at US airport

Two brothers, their wives and children left war-torn Syria with 16 suitcases and crossed the border into Lebanon. They were finally on their way to the United States after working for almost 15 years to join their family members stateside.

But after their flight landed in Philadelphia on Saturday, the two families were told to get on a flight back. It was because President Donald Trump had just signed an executive order denying citizens from seven countries, including Syria, entry into the United States.

Sarmad Assali and her daughter, Sarah, are among the relatives who were waiting to welcome the families to the United States. Sarmad Assali said they received a call from authorities Saturday morning telling them their relatives would not be allowed to enter the country.

The Assalis, US citizens who live in Allentown, Pennsylvania, weren’t able to make contact with their family members until they were already headed back overseas. One of the brothers told Sarmad Assali they were not allowed to make calls or use the Internet while they were held.

According to the Assalis, their family members do not speak English very well and were told by authorities they could either be detained and have their visas taken away, or they could take the first flight back to Doha. Frightened and facing a language barrier, the six family members chose the second option.

The Assalis are Orthodox Christians, one of the most persecuted groups in Syria.

Trump’s freeze on immigrants and refugees

President Trump … temporarily freezing immigration from seven Muslim nations and halting refugee resettlements from everywhere [provides] just the kind of symbolic act that gives weight to radical Islamists when they argue that the U.S. is an enemy of their faith.

Such efforts to restrict access to the U.S. by people fleeing war-torn parts of the world [is] misguided and inhumane. The Migration Policy Institute, a nonpartisan think tank, reported in 2015 that in the 14 years after the 9/11 terror attacks, 784,000 refugees resettled in the U.S. Yet during that time only three resettled refugees were convicted on terror-related charges — two of them for plotting against an overseas target and the third for hatching “plans that were barely credible,” according to the report.

What’s more, a study by the New America Foundation shows that 80% of the terrorist attacks in this country since 9/11 have been carried out by American citizens (although some of those perpetrators were naturalized citizens).

The U.S. became a wealthy world power in large part through immigration. And its openness has provided a lifeline to the oppressed of the world. … Trump’s actions are not only inhumane, they are a betrayal of what the United States stands for.

The International Rescue Committee, a humanitarian aid and refugee assistance group, called Trump’s decision to suspend refugee admissions “harmful and hasty” and noted that the US refugee program “makes it harder to get to the United States as a refugee than any other route.” Refugees must undergo an extensive vetting process — it typically takes more than two years to be admitted to the US as a refugee.

“In truth, refugees are fleeing terror — they are not terrorists,” David Miliband, the group’s president and CEO, said in a statement. “And at a time when there are more refugees than ever, America must remain true to its core values. America must remain a beacon of hope.”

The International Organization for Migration (IOM) and UNHCR, the UN Refugee Agency, expressed concern about the provision in Trump’s executive order that would prioritize Christians fleeing persecution and conflict in Muslim-majority countries over Muslims fleeing those same countries. “We strongly believe that refugees should receive equal treatment for protection and assistance, and opportunities for resettlement, regardless of their religion, nationality or race,” UNHCR and IOM said in a joint statement Saturday.

Abed Ayoub, the American-Arab Anti-Discrimination Committee‘s legal and policy director, said Trump’s executive order has sown “complete chaos.” He said his group has already fielded calls from people around the world impacted by Trump’s executive order, including from students and legal US residents who are citizens of the seven countries banned by Trump and are now stuck overseas.

A flat-pack refugee shelter developed by Ikea and the United Nations has been named the best design of 2016. 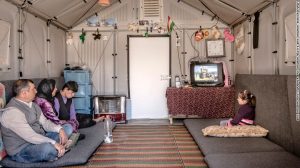 The modular Better Shelter is made from recyclable plastic, comprises only 68 components, and can be assembled in as few as four hours.

Each structure is large enough to house a family of five, and includes a solar panel to power lights and charge devices. Since production started in 2015, 16,000 units have been delivered to countries around the world including Iraq, Djibouti, Greece and Niger, to be used as homes, temporary clinics and offices.

“Better Shelter tackles one of the defining issues of the moment: providing shelter in an exceptional situation whether caused by violence or disaster,” said juror Jana Scholze, an associate professor of curating contemporary design at Kingston University, in a statement.

“Providing not only a design, but secure manufacture as well as distribution makes this project relevant and even optimistic. It shows the power of design to respond to the conditions we are in and transform them.”

Mexicans working abroad, mainly in the US, sent nearly $25 billion in 2015 to their relatives and loved ones back home, Mexico’s Central Bank reports. This is the first time remittances were the most important source of revenue for Mexico since officials started tracking the figure in 1995.

That money is a lifeline for many poor Mexicans, especially when the economy is struggling.

The Trump administration could make it much harder for Mexicans or Americans in the US to send cash to the country by blocking remittances — an idea Trump floated on the campaign trail in a letter to The Washington Post.

In the same letter, the Trump campaign also threatened to cancel visas and raise visa fees as means to either fund the wall or get Mexico to pay for it.

Several evangelical groups have spoken out against an executive order by President Donald Trump which will apparently block refugees from coming to America.

“The lengthy delay imposed in this ban further traumatizes refugees, most of whom are women and children, keeps families separated and punishes people who are themselves fleeing the terror we as a nation are rightly fighting to end,” Scott Arbeiter, World Relief president.

The order, expected to be signed as early as Friday, looks to temporarily block refugees coming to America from Syria, and will halt visas for Muslim-majority nations like Sudan, Somalia, Iraq, Iran, Libya and Yemen.  The total refugee admissions for fiscal year 2017 are also set to be capped at 50,000, which is less than half of the 110,000 total that former President Barack Obama had called for.

World Relief said that it “expresses dismay” at the prospect, and pointed out that the U.S. already has a tight security process when it comes to screening refugees, which includes vetting by Homeland Security and other agencies, multiple interviews, biometric scans, and other safeguards.

Leith Anderson, president of the National Association of Evangelicals, said, “Christians and churches have been welcoming refugees for 2,000 years, and evangelicals are committed to continue this biblical mission. Thousands of U.S. evangelicals and their churches have welcomed hundreds of thousands of refugees over the past 40 years … We don’t want to stop now,” Anderson said.

Who Gives More To The Developing World: Aid Donors Or Migrant Workers?

In a given year, developing countries may get $131 Billion in official aid, and another $431.6 Billion in remittances — money sent home by migrants who are working abroad.

That’s the astounding number in the World Bank’s new Migration and Development Brief. The total in remittances has been going up yearly and is expected to keep rising, the report predicts, though the rate of growth has slowed a bit because of the drop in oil prices, which affects money earned by migrants in oil-producing countries.

The way the money is spent in developing countries is a tremendous boon, Dilip Ratha, lead author of the brief and head of the Global Knowledge Partnership on Migration and Development says. A lot of it goes to meeting basic needs, like food, but it also is invested in “child education and health, maternal health, older people’s health” — and in local businesses.

For the family members, the money “is like a lifeline,” Ratha says. It can help break the “cycle of poverty”