70000 refugees may be stuck in Greece this month

Posted on February 29, 2016 by Grant Montgomery

The UN is warning of a growing humanitarian challenge along Macedonia’s border with Greece as thousands fleeing war remain stuck in limbo. Four Balkans countries have announced a daily cap on how many people can pass through and Austria has restricted entry for hundreds of thousands. 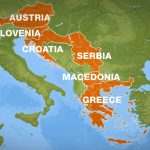 Following the border shutdowns, Greece, a primary gateway to Europe, has been inundated with refugees. Greek officials say the number of refugees trapped in the country may reach 70,000 in the coming weeks, although a NATO plan to crack down on smugglers could limit the flow of migration significantly.

About 22,000 migrants and refugees were already in Greece, Yannis Mouzalas, the immigration minister, told Greek Mega TV on Sunday.

Last week, NATO diplomats said ships already deployed in the Aegean Sea, including Turkish and Greek vessels, would pass intelligence and reconnaissance information to Turkish and Greek coastguards and to the EU border agency, Frontex, and also return to Turkey any people rescued by NATO crews.

Greece has asked for emergency funding from Europe to tackle the unprecedented crisis, Mouzalas said, without providing details on the amount requested.