A wounded child in Aleppo 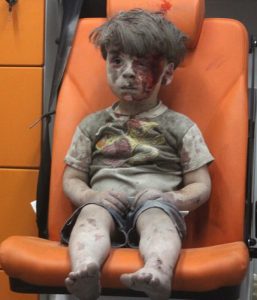 The child is small, alone, covered in blood and dust, dropped in the back of an ambulance with his feet dangling off the edge of a too-big chair.

He doesn’t cry or speak. His face is stunned and dazed, but not surprised. He wipes his hand over his wounded face, looks at the blood, wipes it off on the chair.

The world is staring back. This tiny moment in Aleppo has resonated in a new way.

The Associated Press reports: “A doctor in Aleppo … confirmed he was brought to the hospital Wednesday night following an airstrike on the rebel-held neighborhood of Qaterji.”

“We were passing them from one balcony to the other,” said photojournalist Mahmoud Raslan, who took the iconic photo. He said he had passed along three lifeless bodies before receiving the wounded boy.

“A doctor later reported eight dead, among them five children.”

This entry was posted in Humanitarian Aid by Grant Montgomery.

One reference to “A wounded child in Aleppo”