Contrary to popular perception, international aid is not one homogenous entity or a single transfer of money from donor to recipient countries. The term “international aid” actually covers a wide variety of things, including food and commodities, advice and training, and debt relief.

In 2011 — the last year we have comprehensive data for — total development aid from rich countries stood at nearly $150 billion, according to the Investments to End Poverty report. Only $59 billion identifiably involves the transfer of actual cash to, for example, recipient governments, NGOs operating on the ground or special project funds. 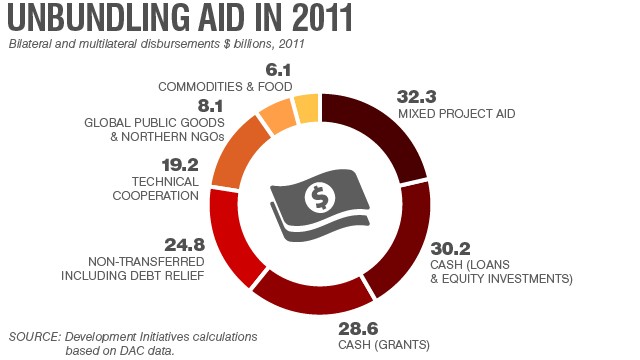 Aid-in-kind makes up another $25 billion. Most of this is food aid, which is used to tackle acute hunger — but even this form of aid is not without controversy. Many donors avoid shipping actual food to developing countries, aware that it destroys local markets and harms local farmers.

Research demonstrates that food aid can be poor value for money, especially when food grown in donor countries is shipped to the developing world. Sorghum shipped from the United States is 200% more expensive than it is in Chad and almost 100% more than in Sudan, according to Development Initiatives calculations. Despite this, the United States and Japan continue to make extensive use of food shipments.

This entry was posted in Humanitarian Aid, International Cooperation, Philanthropy by Grant Montgomery.