Hundreds feared dead as migrant boat capsizes in the Mediterranean

An Italian patrol ship arrived in Malta on Monday with 24 bodies recovered out of hundreds feared drowned after a migrant boat capsized in the Mediterranean. The boat was about 120 miles south of the Italian island of Lampedusa, roughly 60 miles from Libya, when it capsized. The migrant passengers are often from a range of North African countries where war and strife rage. 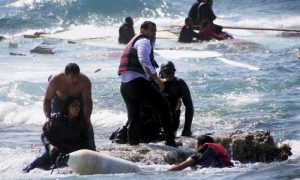 The death toll from Sunday’s shipwreck off the coast of Libya is one of the highest yet. Officials said there had been at least 700 people on board, some reportedly locked in the hold. Estimates of the number of people who were on the 65-foot craft range from 700 to 950.

NPR’s Sylvia Poggioli reports: “One survivor says there were 950 people on board, many locked in the hold by the human traffickers before departure.”

Another boat carrying migrants ran aground off the Greek island of Rhodes, with authorities saying that at least three people had died.

The European Union is holding an emergency meeting in Luxembourg as some 1,500 migrants are believed to have drowned in the Mediterranean so far this year; more than 10,000 have been rescued.

This entry was posted in Humanitarian Aid by Grant Montgomery.