Posted on February 8, 2015 by Grant Montgomery

She had always been the unidentified, lone female American hostage of the Islamic State. For nearly 17 months, while her fellow American captives were beheaded one after another in serial executions posted on YouTube, Kayla Mueller’s name remained a closely guarded secret, whispered among reporters, government officials and hostage negotiators — all fearing that any public mention might imperil her life. 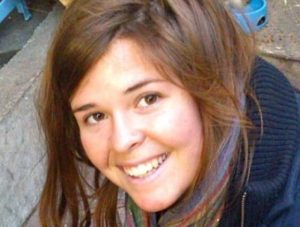 Kayla Mueller, who was born in 1988, had a deep desire to help those less fortunate. After graduating from Northern Arizona University, she worked for aid organizations in India and Israel and in the occupied Palestinian territories, according to statement from her family.

In 2012, she was drawn to what would soon become the world’s top humanitarian crisis, the Syrian civil war. She moved to Turkey, where many Syrians were seeking refuge, and she settled in a border town assisting Syrian families for the Danish Refugee Council and an aid group called Support to Life. “The common thread of Kayla’s life has been her quiet leadership and strong desire to serve others,” her family said in the statement.

The family advisers said there was not any indication that she had been working with an aid group when she went to Aleppo. She had no professional connection to the Doctors Without Borders compound, said Carlos Francisco Cabello, the current head of the Spanish division of Doctors Without Borders’ Syria mission.

“She appeared there with the external technician in a war zone. We didn’t know that she was coming, or otherwise we would not allow her to visit,” Mr. Cabello said, speaking by telephone from Turkey. “U.S. and U.K. citizens at that moment, and even now, were not considered for the Syrian mission for M.S.F. for obvious security reasons,” he said.  “Aleppo at that time and now is a war zone.”

In an interview with The Daily Courier in Arizona, Ms. Mueller described how fulfilled she felt by her work with refugees, which included leading art classes for displaced Syrian children.

“For as long as I live, I will not let this suffering be normal,” she said.


This entry was posted in Humanitarian Aid, International Cooperation, Philanthropy by Grant Montgomery.