Research has shown that there’s a relationship between the visability of a humanitarian aid brand — its public recognition — and donations, says Dmitry Chernobrov, a lecturer in journalism and politics at the University of Sheffield. 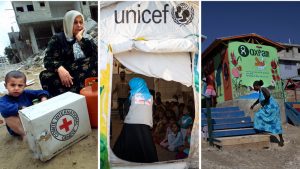 Such logos also help ensure that charities and donors get credit for their good deeds. According to USAID’s branding guide, their red, white and blue logo “was developed to ensure that the American people are visibly acknowledged for their contributions.”

Logos have become such a powerful tool that there have been incidents of ISIS stealing U.N. food aid, slapping their own logo on the boxes and redistributing it back to people.

Governments — especially those recovering from a humanitarian crisis — are anxious to get credit, too, says W. Gyude Moore, the former Liberian minister of public works. Except there’s one problem: They don’t often control the purse strings.

It’s the topic of a new paper he’s written for the think tank Center for Global Development, where he is now a visiting fellow. He argues that in fragile states, it’s in the best interests of aid groups and development agencies to let the home country get credit for big-ticket aid interventions and rebuilding efforts — even if their role was to negotiate the deal. After crises, governments and its citizens have a fractured relationship, says Moore. Citizens want to trust that their governments can handle a big shock. And governments want to ensure that they have the trust of the people.

“Public goods like roads, hospitals and schools are the most significant ways the state can make its benevolent presence felt,” he writes. Otherwise, it may lead to “nationwide consequences, ranging from protests to separatism.”

Meanwhile, concerns about safety have made some aid groups rethink the use of logos. In a conflict zone, when logos are emblazoned on products as well as T-shirts worn by staff, that could put staff at risk. Aid workers are increasingly under attack, especially in conflict zones like Syria and Yemen.

“[We used to think that] if we stick [a logo on], everyone will know we’re here to do good,” says Paul O’Brien, vice president of policy and advocacy at Oxfam America. “But there’s less and less of that notion that the branding will keep you safe. We need to get out of the branding game.”

This entry was posted in Humanitarian Aid, International Cooperation, Uncategorized by Grant Montgomery.

One reference to “Logos on aid supplies: Helpful or dangerous?”