The psychological toll of the Syrian refugee crisis

Posted on September 18, 2015 by Grant Montgomery 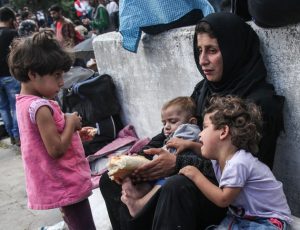 The nearly 12 million Syrians — half of them children — who have fled their homes to protect themselves and their families have seen unspeakable violence, both during the war in Syria and during their escapes.

These experiences are understandably traumatic, but their long-term effect may be even greater than we realized. A new study has found that half of the Syrian refugees who have fled to Germany are experiencing psychological distress and mental illness resulting from trauma, Germany’s chamber of psychotherapists announced this week.

The researchers evaluated refugees seeking asylum in Germany, and found that more than 70 percent had witnessed violence and that about 50 percent were victims of violence themselves.

The findings also revealed that 40 percent of adult refugees experienced nightmares, and 50 percent had vivid flashbacks reliving a traumatic event.

Forty percent of the children who were evaluated had witnessed violence, and 26 percent had watched their families being attacked, the new research found. 1 in 5 suffers from a psychological disorder as a result of trauma.

Dietrich Munz, president of the German chamber of psychotherapists, estimatedthat while 3,000 to 4,000 psychotherapy sessions are offered in German refugee camps each year, the demand may be 20 times higher.