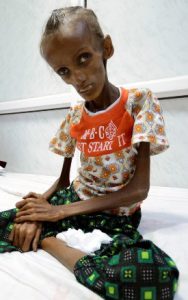 The UN World Food Programme fears “an entire generation could be crippled by hunger” as the food crisis in war-torn Yemen grows worse.

In some areas of the country, 70% of the population struggle to feed themselves.

“An entire generation could be crippled by hunger,” Torben Due, the program’s director in Yemen, said in a statement. “We need to scale up our life-saving assistance to reach more people with timely food assistance and preventive treatment. We appeal to the international community to support the people of Yemen.

The war in Yemen began in early 2015 when Houthi rebels — a minority Shia group from the north of the country — drove out the US-backed government and took over the capital. A Saudi-led coalition, made up of several Arab countries and backed by the US, began a military campaign aimed at restoring the Yemeni government. The ongoing conflict has left thousands dead and starving.