The Olympic Refugee Team has its own flag and anthem

At the opening ceremony in Rio, the first-ever Refugee Olympic Team marched in the Parade of Nations carrying flags emblazoned with the five-ring Olympics logo. It was a powerful unifying gesture in a time marked by global unrest; these ten athletes were representing not just their war-torn countries, but the world. But in a certain light, assigning this team the most universal sporting symbol on Earth was to deprive them an identity of their own. What this group really needed was its own symbol.

Now, members of the Refugee Olympic Team have that option. A non-profit called The Refugee Nation commissioned artists to develop a flag and national anthem for the Olympic team that would represent the athletes and the growing number of refugees around the world. “We felt they deserved a more unique identity.” 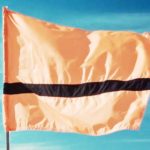 The flag is a banner of bright orange crossed by a single black band—colors that evoke the life jackets so many refugees have worn on their journeys to safety. “If you’ve worn a lifejacket as a refugee, you will feel something when you see this flag,” says Amsterdam-based Syrian refugee Yara Said, who designed the flag. “It’s a powerful memory.”

This entry was posted in International Cooperation, Uncategorized by Grant Montgomery.